When I was 15, my European History teacher asked the class, “If you were king, would you rather lead your subjects with fear or love?” (We were studying Machiavelli. Or something.)

He picked students at random. The first guy he asked quickly responded, “Fear.” So did the second, and the third.

The first girl he asked?

Said love. The answers went along gender lines for some time. It was as if we were lining up at a middle school dance: guys on one side, girls on the other. The Sweet Girly Love Camp on one side, the Powerful Scary Man Camp on the other.

And then he called on me.

“Fear,” I answered without hesitation.

I was the only one in the class who bucked the gender trend. I’ve often wondered since then if the answers truly would have fallen so clearly along male/female lines had the question been asked anonymously. I’ll never know, and ultimately it doesn’t really matter anyway.

I was a vicious competitor in those days, and I was fueled by fear.

Later, when I began to fall short of my narrow definition of perfection, my fear of failure somehow shifted to a fear of my own voice, my own power, and maybe more importantly, my own success. Many people who know me may be surprised to hear this. Others? Not at all.

Many of us are afraid to do what we truly love — not only for fear that we might fail at it but also for fear that it actually might be amazing.

And what is that, you ask? What does this dog-owning, cupcake-baking, home-redecorator really love?

Thank you for being the place where I grew, fell, and picked myself the fuck back up again.

There’s so much more I could say about all I’ve shed this year, but this is not the time, the place, or the post for that.

Instead, I’ll leave you with this. I made it. And I’m not afraid to post it even though it has a typo in it. It’s not perfect, and I don’t care. I like it a little better for its imperfection anyway. 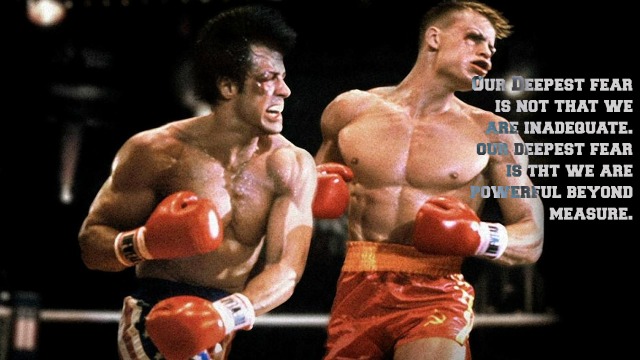 I’m off to write a movie, people.

This morning the dogs and I went on our old Hollywood Hills hike. It has been a long time since we set foot on those familiar trails, but it felt like time today. After our jaunt, we walked over to my favorite rock in the park. I’ve had many epiphanies while sitting in silence there, and it’s a comforting ritual.

While we sat listening to the rustling sounds of nature, a Native American man began singing tribal chants from a nearby hilltop. What his voice lacked in pure melodic beauty, he certainly made up for in fearlessness and passion, and that’s what drew me in. 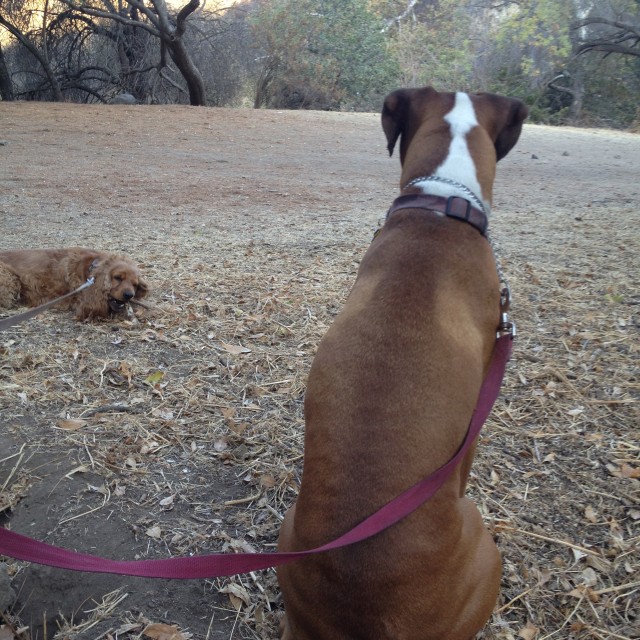 I was a little lost in thought when our hiking buddy Bradley and his dog Romeo approached us.

“How are you?” I asked, finally looking over at them.

“Well, I’m not singing from a mountaintop this morning, but I’m alright,” he replied.

We both laughed for a moment before I said, “We probably should sing from mountaintops. I bet it would be good for us.”

We listened for a little longer before I let Albus off his leash so he could run around with Romeo. The boys took off after one another at breakneck speed, and we laughed again while we watched our pups run, punch, and play with joyous abandon. (Unaffected by it all, Woodley continued to covetously gnaw on her stick.)

After our friends went home, the dogs and I stayed longer to listen to the chanting. (Still, Woodley chewed.) 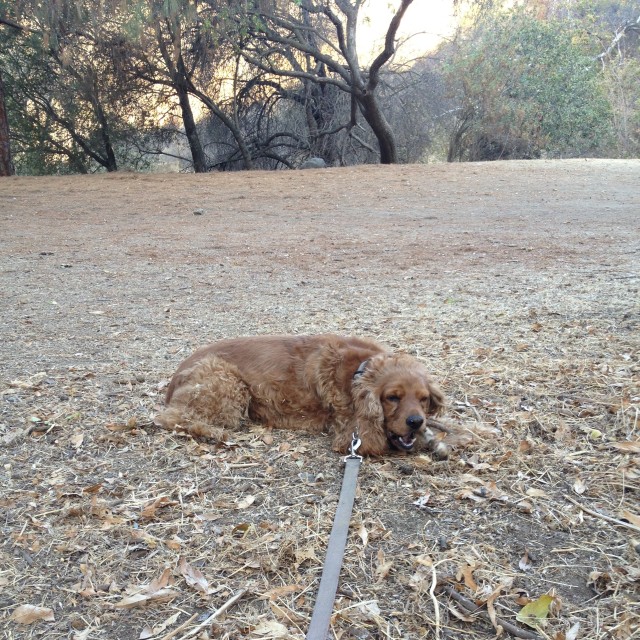 Get that stick, Woods. Just get it.

As the man sang, I thought about my late stepbrother, Noah. He had a deep and abiding love for Native American culture and attended many tribal gatherings over the years.

When we lose people we love, I think we look for signs they still exist somewhere else. We want to feel like they’re with us even though they’re not physically standing by our sides. I felt a little of that this morning as the man sang. I felt a little like Noah was out there somewhere, listening with me.

I think it’s good to focus on those comforting feelings and not just the feelings of loss. Sometimes, though, I’m like Woodley and I get so intent on my stick (read: accomplishing goals/crossing items off my to-do list) that I fail to notice the joy around me. I get so wrapped up in perfection or what’s missing that I don’t see the good in my life. This sort of focus on lack makes me more fearful, less open, and less loving.

It makes me want to dwell less on what I’ve lost and more on the joy that love brings instead.

I mean, just look at Noah and Grandpa: 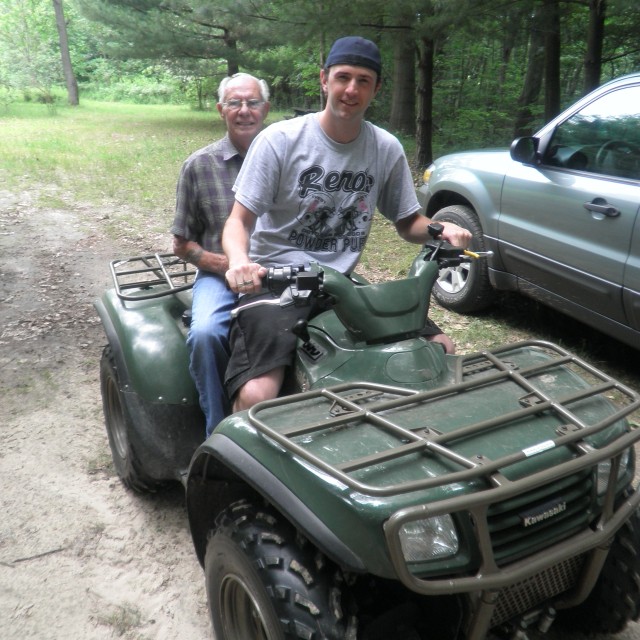 I want to dwell on the joy they brought while they were here. Also? I like to imagine them drag racing angels in some treelined corner of heaven ‘cuz that image makes me happy.

So anyway, what all of this has led me to believe is this: People really need to let go of fear and just love more, play more, and create more.

And by people, I mean adults.

As kids we loved more easily, played more freely, and we created without fear.

Like the playful pups and the man this morning with the less than perfect pitch, we were unfraid. We didn’t care if our art was bad. We made it anyway. Even if it was only a macaroni necklace for our mom, we proudly presented it like it was a Paloma Picasso. Somewhere along the way, though, we started to believe our art didn’t measure up. We started to believe WE didn’t measure up. We got fearful about our creations, about our feelings, about ourselves, and about life.

So today I’m creating… without judgment, without fear… and with Legos. 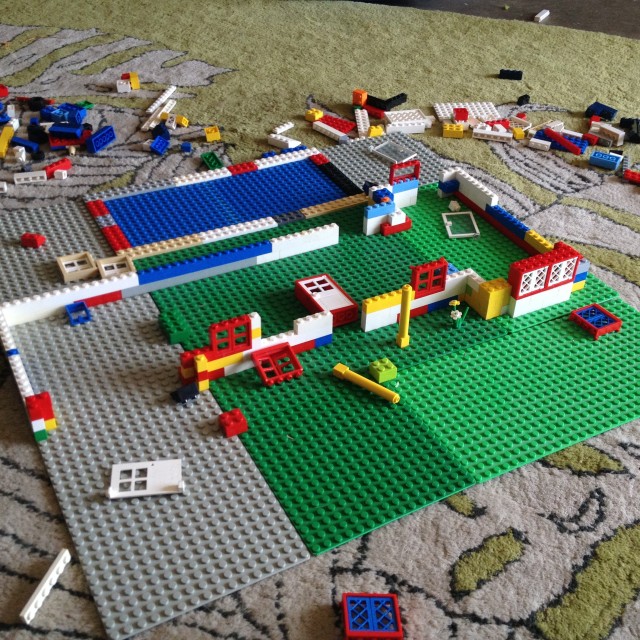 A large dog may have gone Godzilla on this situation once or twice today, but I’m not mad about it.

There’s no fear in love, folks.

John Lennon said so… and so did that one Apostle guy.