Guys, guess what? It’s Ash Wednesday! (Or the day everyone in LA tells me I have stuff on my face.) 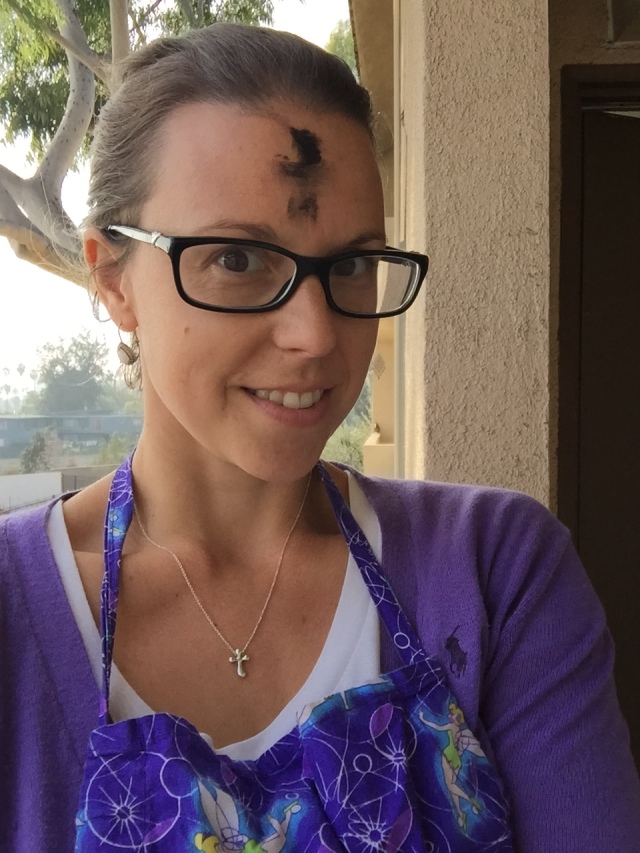 Stuff on my face.

It might seem strange that I get excited to let something go for Lent, but I love this time of year. I really do. There’s something about celebrating a season of new beginnings on Easter after 40 days of sacrifice and contemplation that just feels super cleansing. But maybe that’s just me. (More on that here.)

If you’re wondering why I’m wearing a purple Tinkerbell apron it’s because it matches my sweater (true story), and also because the photo was taken moments before I got into some Paleo-approved magic in my kitchen.

My friend Mike sent me this recipe for PaleOMG’s Protein Cookie Dough Balls*, and given that cookie dough is kinda like my kryptonite I figured they were worth a shot.

I’ll spare you the suspense… they were.

Even my dinos were way into them.

I think these just might be my new breakfast obsession. I’m running the numbers, and I think they win the affordability battle over Luna Bars.

Besides, they’re balls. out. delicious.

I didn’t use the protein powder in the recipe (which is why they’re dark). I opted for Trader Joe’s vanilla flavored hemp protein because everything’s cheaper at Trader Joe’s, and I refuse to go traipsing all over LA to find a protein powder that probably costs 9X as much somewhere else. Hemp is gluten free, so I’m not sure why the protein powder isn’t labeled as such, but I’m not losing any sleep over it.

I also used Kroger mini-chocolate chips because I already had them in the house. (Most semi-sweet chocolate is gluten free anyway.)

Finally, I used 1 1/2 T of coconut oil instead of 2T of coconut butter because I had the former and could not rationalize investing in the latter for just one recipe.

All of THAT boils down to THIS: my frugality didn’t wreck the recipe. They’re delicious.