“Does anyone in Brooklyn have any wine they could spare? Preferably a Gruner? The shop up the street is closed because of Sandy and we could really use some right now.”
*Comment from Concerned Friend* “I hope you don’t have to settle for a chardonnay, dude.”

“Do you think they’d deliver more Makers by canoe? We’re almost out on the UWS.”

“If only candles powered cable TV.”

These updates were interspersed with instagram photos of abandoned SUVs in flooded streets and wet little dogs looking really sad and bedraggled in their ineffectual coats.

And now you know what was on the minds of my New York friends last night. Sandy might have been wreaking havoc in their streets, but she did nothing to diminish their senses of humor.

I’ll admit I felt a bit guilty that it was 88 degrees in Southern California yesterday. As the sun set outside my window, I watched the coverage of Sandy’s devastating power, and I was grateful I was warm and dry. I chuckled as I read a variety of tweets and status updates, glad my friends were safe — even if they were soaked from walking their dogs in the storm — and nearly out of booze.

As the evening wore on, the air cooled considerably and I found myself craving something warm and hearty. (Maybe it was those shivering reporters standing in knee deep water….) I decided to make a comforting shrimp and tilapia fisherman’s soup from a recipe I found online last week.

It’s delicious, simple, and definitely worth making. You can find the recipe on Cookin Canuck here.

This shrimp and tilapia soup is easy to make, and it’s also good the next day.

As my grandpa would say, “It’s better than a kick in the head.”

Or a shark in your street…. 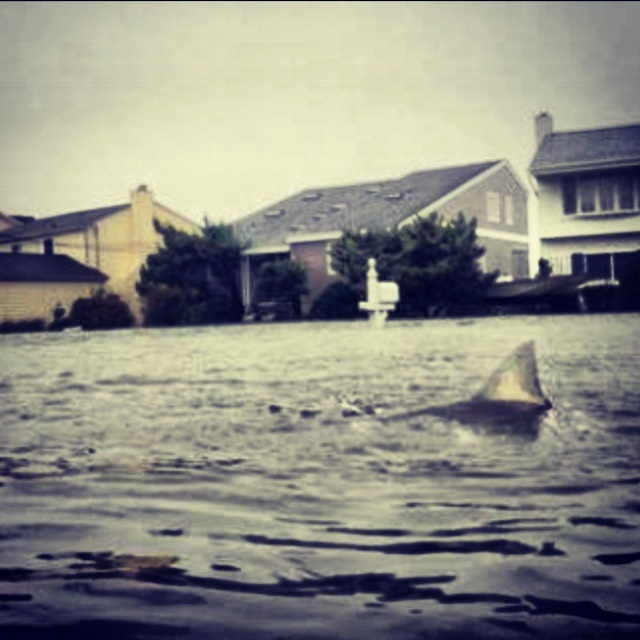 The photos of a shark in a New Jersey neighborhood have gone totally viral. Kevin McCarty posted them on his Facebook page and insists they’re legit. Photo Courtesy of Kevin McCarty via Grind TV.

I think my friend’s five-year-old niece summed up the storm best. Upon learning that school would be closed the following day because of Sandy, she told her mother, “No one likes her.”

That’s right, Sandy. No one likes you.

Now, here’s hoping the east coast recovers quickly because as funny as my friends are, there’s nothing funny about the devastation Sandy brought….