Don’t hate me for saying this, but it’s almost 85 in LA today. It’s just a little gift from God to make up for the gridlock, the hoards of hipsters littering Hollywood, and the astronomical rent we pay to sip in all kinds of smog every day.

So, anyway, I’m blogging from Peet’s Coffee Shop this afternoon like some sort of college student, and it makes me feel more alive than I’ve felt in months. I miss periodically staring out a window, surrounded by a never-ending bustle of strangers coming and going while I write. It’s sort of an accident I’m here, really, but it’s a happy accident. I was rushing out the door for yoga earlier and I accidentally went to the wrong studio. I didn’t have time to drive to the right studio before class started so I’m in the valley with my computer killing time until the next class. Today is about lovely accidents, but isn’t life?

I mean, I  just had a brief and amusing conversation about Latin with the stranger who rescued the contents of my purse from under his chair. I felt the need to explain why baby wipes, coconut chips, and fingernail clippers had ended up under his feet by quoting the Coast Guard motto, “Semper Paratus.” It means “always prepared,” and wouldn’t you know? He knew Latin too. Four years of declining nouns and conjugating verbs reached its maximum utility in a coffee shop in LA, folks. (Actually, it really may have had its greatest moment when I impressed a pack of drunk frat boys by translating the motto carved into the Psi Upsilon fireplace when I was 19, but whatever. Either way, Latin crops up in lovely and strange moments for me.) We ended up smiling before he went back to his book, and I went back to writing this post.

This is all terribly random, but I’m wrapping up quite a year of unexpected stuff, so the lack of focus in this post seems appropriate somehow. This year was truly an epic curveball  in so many ways, and I’m OK with it. (I kinda have to be since I can’t really change any of it anyway.)

This year my mentor died suddenly as did my stepbrother, and I fell in love for the first time in like forever, so 2013 certainly was one for the books. I went a little Paleo, a little crazy, and I gained about 7 pounds partying like a college kid last spring. I finally lost the weight, shed the regret, and along the way I learned it’s OK to cry in someone else’s arms. I got baptized in the wrong baptism pool by a boy who was so rattled he could hardly dunk me. I danced on the patio of The Bungalow on Easter with one of my best friends even though there’s no dance floor there, and I held some of the most amazing people I know while they cried in my arms. All in all, 2013 was just a whole lotta holy s#*!, but I’m still standing, so there’s that.

I’m wrapping up 2013 by consulting with an Ayurvedic doctor, and her analysis of my constitution has yielded tremendous insight into my ailments — both mental and physical. I will write more about it later, but essentially I learned I’m the rarest constitution on earth because I’m equally influenced by all of the natural forces that manifest physically. I’m something called tri-doshic, and my type only makes up 3% of the population. Tri-doshic individuals are more affected by the seasons and the people around them than any of the other types. We’re almost like human lightening rods for others’ emotions, and it may explain why friends, strangers, and family members have been telling me their deepest, darkest and most painful secrets most of my life. I guess it’s because  I seem like I can relate? Or something?

Whether you buy into this sort of thing or not, I will say this: discovering my type put into words what I’ve always known somewhere in my soul… I’m wired in a super weird way and that’s OK. (Aren’t we all, though?)

It might explain why I’ve always felt like there were two different people fighting for airtime inside the same body or it could just be the story I needed to accept who I am. I’m equal parts Meghan and Anika, and that’s just the way it is. I’m as comfortable on a horse wearing a cowboy hat and singing Luke Bryan at the top of my lungs as I am in pearls hosting a charity event. I’m just as likely to be screaming at football players on TV as I am peacefully doing a down dog in a yoga studio. I’ve never been able to comfortably fit into any mold. I was one of the few sorority girls in film school (there were seriously like six of us — I’m not kidding), and I have always been friends with a diverse array of individuals who have almost zero overlap between one another.

I’ll never make anyone listen to Hank Williams Jr. followed by Busta Rhymes if they don’t want to. I’ll probably always wander off and do my own thing for a while because I can’t be confined in any way, but I’ll always come back home. It’s the way I’m made. Some of my makeup is my Bumpa’s wandering, dancing, making-friends-with-strangers blood in my veins. Some of it is my disciplined, buttoned up, deer-hunting, perfectionist father’s genes. Some of it is my mother’s louder, more extroverted (but also perfectionist), quick-witted, sharp-tongued DNA. It’s also as much my Aunts’ sweetness and softness as it is my Uncle’s outrageousness and artist’s soul. It’s all of it. I’ll write more about the new age-y Ayurveda stuff later. I really need to turn off the Jo Dee Messina blaring in my headphones and head off to yoga.

For now, I will leave you with this. It’s a beautiful song I discovered in yoga this week. May it inspire you to do something bold in 2014. I know I said I was going to keep these philosophical posts on the other blog, but I really was trying to talk about food when I sat down to write. This just came out instead. #oops #happyaccident

So officially, Tom Brady, Tony Bennett, and I turned another year older on Saturday. My birthday began with a serenade from Suzie in London and ended with one from Anna just a few blocks away. And in between those sweet renditions of “Happy Birthday,” I felt so loved by all of the other wonderful people who called, texted, sent cards, and took me to a concert.

My actual birthday party isn’t until the 17th of August, so I have a few more weeks to tweak the birthday party playlist (can anyone say perfectionist?!?), but I’m going to wrap up the playlist posts today.

And the final playlist post? Is about the songs just for me.

So here it goes…

It’s for letting myself buy a pair of fat jeans this summer and almost being okay with it. It’s for learning that sometimes it’s better to do 85% than to always give 100%. It’s for finally accepting that even though my career didn’t turn out the way I expected it would, it’s actually turning out a whole lot better. It’s for realizing my dad was right when he made me go to Michigan. It’s for finally embracing USC for the people it brought into my life.

I find cardinal and gold inspiration. 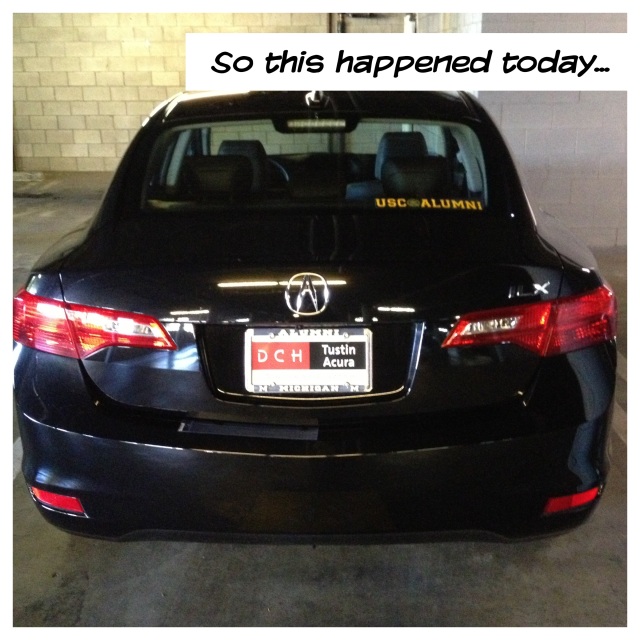 I even put this ridiculous sticker on my car recently.

It’s for getting back up each time I have gotten knocked down. It’s for realizing that going to Phish shows and joining a country club don’t need to be mutually exclusive. It’s for the understanding that I can be a yuppie with a side of something weird too. It’s for learning that it all starts with loving yourself fat jeans and all….

Jack Penate’s Pull My Heart Away

Beyonce’s Dance For You

Lady Gaga’s Dance in the Dark

Tiesto with Tegan and Sara’s Feel It In My Bones

Oh and BTW? I’m totally wearing a Ralph Lauren sweater to the Phish show at the Bowl tonight.

Prince makes many appearances on my birthday party playlist. I adore him even though he does weird things with his face. Photo Courtesy of The Urban Daily.

I just spent the last hour in my walk-in trying to figure out what to wear to my birthday party next weekend. Now that I’m nearly suicidal, I think I need to switch gears. It’s time to work on the party playlist. Last year I neglected the task and I swear we ended up listening to way too much emo hipster music. Six hours of whining white boys is only appropriate for a mass suicide. (Or my fashion parade pity party.) Party playlists need to have the right amount of Whitney. And Michael. I mean really….

Sadly, I will have to forego some of my favorite hip hop tunes owing to the number of toddlers who will be in attendance next Sunday. I don’t want to be responsible for some kid standing a chair singing, “To the windows, to the walls, ‘til the sweat drips down my balls” in front of his entire preschool class. (We’re saving Lil’ Jon for my 35th next summer. There won’t be any children at that gathering.)

It’s a 7 hour playlist, so I’m going to spare you the specifics, but here are a few of my faves that made the list:

Shaggy: Oh Carolina (And, yes, this song is from the Sliver Soundtrack, but I don’t care. It’s still a fresh jam even if I have no idea what “Prowl off. Jump and Prance,” means. It’s probably dirty but if I don’t get it, the toddlers won’t either.)

Junior Walker and The All Stars: Shotgun (Because it makes me want to dance on a table in my heels. And also because it’s all kinds of awesome.)

Tiesto featuring C.C. Sheffield: Escape Me (Great tune for working out and also for just hanging out and being fabulous with friends.)

Eric Prydz vs. Floyd: Proper Education (Obviously I love Pink Floyd’s Another Brick in the Wall from The Wall, but this version has a better party feel.)

MGMT: Electric Feel (Like Modest Mouse’s Float On, this song never gets old.)

Prince: 1999 (It wouldn’t be a party without a bit of Prince. OK, there’s A LOT of Prince on my playlist, but it’s only because I love him. Like REALLY love him.)

Mark Morrison: Return of the Mack (Because I’m not about to neglect the 90s — or leave it to Shaggy to represent them by himself.)

Barney Stinson may believe the best mixes are all rise, but I think you need to chill things out a bit towards the end of the night — especially on a Sunday. Here are some of my slower jams.

The Rolling Stones: Beast of Burden (My second favorite Stones song of all time behind You Can’t Always Get What You Want.)

Otis Redding: The Dock of the Bay (This is a super obvious Otis tune, but it’s such a classic I can’t help myself. I have SO much Otis. I adore Otis.)

Paul Anka: Eye of the Tiger (If you haven’t checked his cover album, Rock Swings, do it. Now. You’ll thank me later.)

Oh, and because it’s a Peter Pan Party, I had to add Hook’s tarantella, Another Princely Scheme, from the Broadway musical.

Tomorrow I’ll give you an update on the flower arrangement crisis as well as the candy bar….