Since we’re just ending the holiday season, I thought I should show you some of my giftiness. 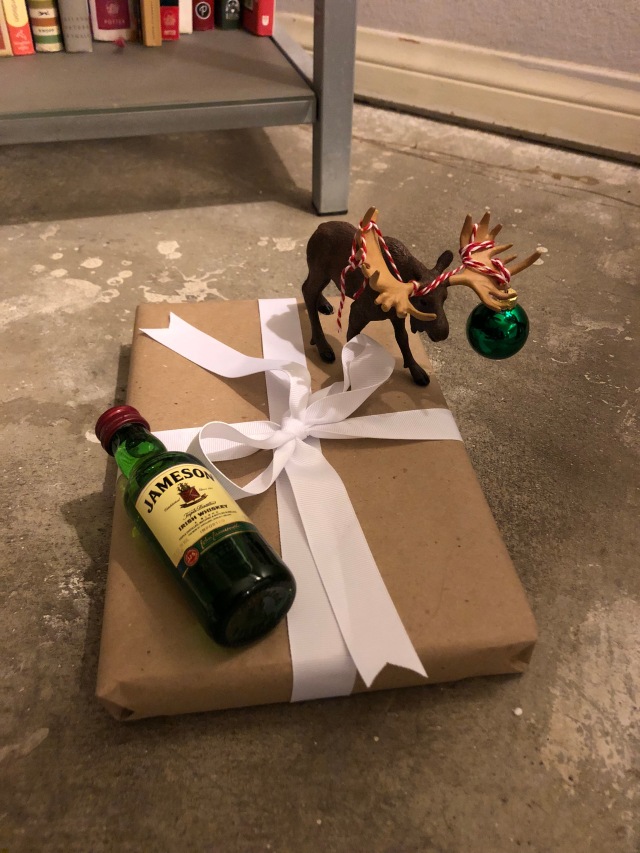 This was a book for Dan.

Dan is from Minnesota (where the moose hang out). Dan likes Jameson, books, and bread pudding. I didn’t have time to make him dessert, but I did make him dinner on Christmas day, so there’s that.

This was a bartening book for Tim. (He asked for it.)

Tim can be grumpy, but he always brings me clean socks, new shirts, and salad without tomatoes or raw onions because he knows I hate them. He has like 32,000 dogs, so I had to wrap his present in pugs. (Also? I garnished his gift with a lamb’s ear covered in liver paste for one of his beasts.)

My boss, Brian, likes bread and recipes, so this was for him.

It was a soup recipe book because he’s bonkers for soup. I added some holiday flair in the way of bulbs to counteract his seasonal “Ba-Humbug” situation.

This naughty nugget and his gift were for Lauren.

Lauren is my dog’s fairy godmother. She lets him sleep with her whenever he spends the night, and we both love her to death.

This little mouse and his books were for Jody.

Jody and I have been friends since we were 19 years old. We met while we were having meltdowns in edit bays in Ann Arbor, and the rest is history. 20 years later, we’ve been together for funerals, birthdays, Christmas Mass, and everything in between. This is a stack of Narnia books for her son, Connor, who just happens to be my birthday buddy.

Jody attended my church Christmas Tea in December, and I gave her a copy of The Lion, the Witch, and the Wardrobe, and Connor was HOOKED, so I bought her the rest of the series.