When you’re prepping your birthday party candy bar, it’s probably best to listen to happy music like Mtume’s Juicy Fruit (if it sounds familiar it’s because Biggie sampled it for Juicy). Or Michael’s The Way You Make Me Feel. It’s also a good idea to wander into your bedroom to make sure your enormous dog isn’t eating anything like, say, the remote control to your hanging lanterns.

Well, I thought it looked like fun. Also, you were playing with candy and you weren’t giving me any.

So anyway, today I decided to experiment with marshmallows and sprinkles. I used white chocolate and corn syrup as agents to attach the sprinkles to the marshmallows. I think I prefer the white chocolate method; it adds more flavor, it dries faster, and it basically just works better all around.

I played around with the sprinkles I happened to have in my pantry for this draft, but I will likely discard most of the dipped marshmallows for a variety of reasons. My green gum balls are supposed to arrive from Amazon on Monday, and I intend for them to anchor the candy bar. Once I have them in the apothecary jar, I’ll have a better idea of my actual color palette. 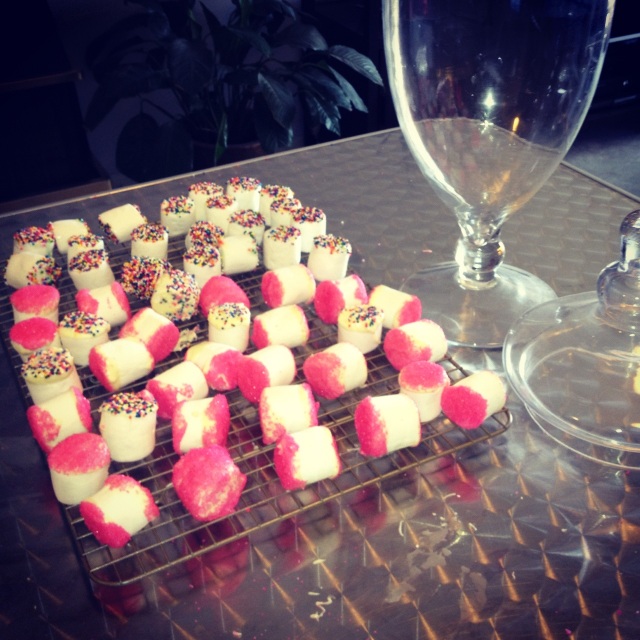 I dried the marshmallows on a cookie sheet to prevent them from sticking to the table. I still managed to make a big mess of things anyway.

By the way, if you decide to use melted white chocolate chips as a dipping agent, make sure you add Crisco to the chips, otherwise you will never achieve the proper consistency to adhere the chocolate to the marshmallows. Remember my cake pop disaster? Yeah, the same principles sort of apply to marshmallow dipping too. Also, if you want to dip both ends it’s best to dip one end, let it dry for a bit, and then dip the other end. (I found that less of the sprinkles slid off that way.)

Now that we’ve covered white chocolate and gravity, it’s time to move on to the next part of the candy bar: the gummy crocodiles. While I was on a quest for affordable sprinkles to fill the vases for my floral arrangements, I found amazing gummy gators. Since a flesh-eating crocodile (croc/gator, close enough) is featured prominently in Peter Pan, I thought it was only appropriate to buy every box they had… even if they only had two. 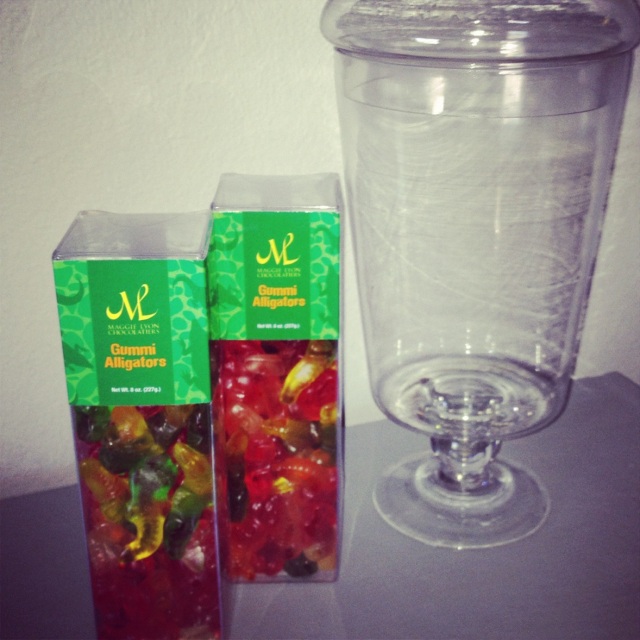 I love gummy anything, and these “gummi” gators are super yummy. (I had to sample a few — you know to make sure I’m not poisoning my party guests or whatever.)

It’s quite likely that most of our partygoers won’t know the book as well as I do, so I’m making little cards with quotes from the novel explaining the more obscure details of the party décor. For the gummy gator/crocs, I’m going with this passage:

“’I have often,’ said Smee, ‘noticed your strange dread of crocodiles.’

‘Not of crocodiles,’ Hook corrected him, ‘but of that one crocodile.’”

Oh, and speaking of crocodiles, this croc will be chasing my watermelon Jolly Roger carving.

Amazon had other plastic crocodile options, but this one seemed appropriately feisty. And just basically, bad ass.

I’m going with this quote for the pirate ship/plastic croc display, “’It liked my arm so much, Smee, that it has followed me ever since, from sea to sea and from land to land, licking its lips for the rest of me.’” 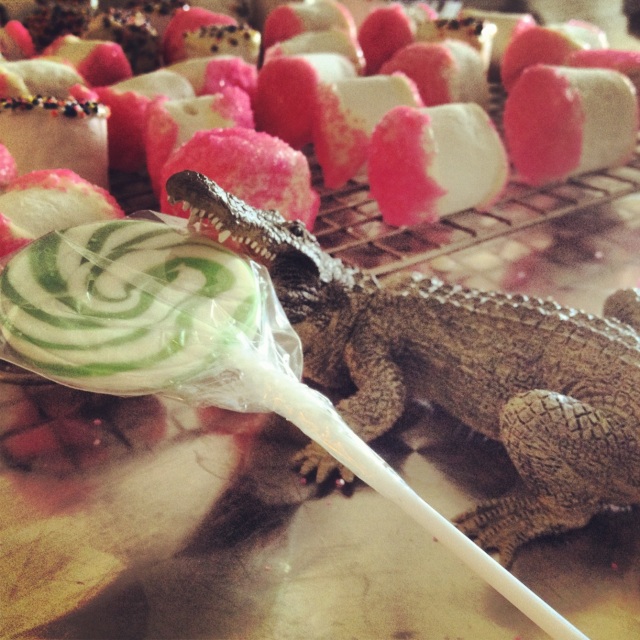 This greedy croc has stolen my suckers.

Once I wrestle my suckers back from him, I have plans for the confections that likely involve hanging them from trees with ribbons. More on that later….